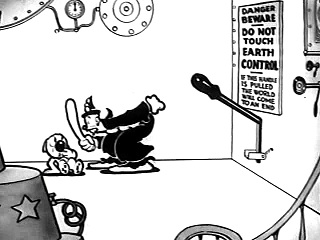 Koko's Earth Control is a 1928 Max Fleischer cartoon, starring Koko The Clown and Fitz the Dog.

The short begins with Max at his drawing board, inking in Koko and Fitz running across an animated earth, until they find the "Control of Earth" station. Inside, the duo begin carelessly toying around with its controls, with Koko trying to stop Fitz from pulling the lever that will end the earth. Naturally, he fails, resulting in the sun melting the moon with a breath, and the sun getting blown up by a comet. This results in recurring flashes of lightning, and Koko and Fitz getting seperated and winding up in their own escapades, until these devastating effects of their mishaps extends into the real world!

This short is in the Public Domain and can be viewed here.