Film / Woman in the Moon 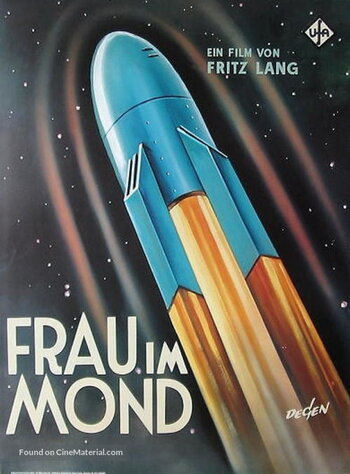 That's one large step for a man, woman and child!
Advertisement:

After his stunning success with Metropolis, German studio Ufa gave director Fritz Lang free rein on his next project. Excited by the idea of rockets and spaceflight (hugely popular in Germany at the time) he decided to make a film about a rocket expedition to the Moon.

Lang insisted on such technical accuracy that, even though it’s a silent film made in 1929, Frau im Mond has uncanny similarities to the Apollo program three decades later. Just witness the moment where a giant three-stage rocket is assembled in a cavernous building, then trundled to the launch pad by means of a huge transport platform down a dual-tracked road. Several cliches seen in the sci-fi movies of the 1950's and onwards also originated with this film, such as the portrayal of the crushing pressures of acceleration (close-ups of dials and straining facial expressions), the comedy of trying to eat and drink while weightless, and a crewmember making a Heroic Sacrifice so the others will have enough oxygen to survive. It was also largely responsible for changing the popular portrayal of a spacecraft from Jules Verne Steampunk to SciFi Golden Age Retro Rocket.

Frau im Mond had interesting historical consequences. In order to promote the film Lang persuaded his technical advisor, Hermann Oberth, to construct and launch an actual rocket as a publicity stunt! As far as they knew no-one had ever done this, as US scientist Robert Goddard had not publicized his experiments. Unfortunately Oberth, more suited to the quiet world of academia, broke down under the strain and failed to meet the deadline. The resulting publicity however provided the funding for amateur rocket enthusiasts to continue Oberth's project. This in turn attracted the attention of the German military, who offered the groups' most promising member — a young Wernher von Braun — a contract to work on ballistic missiles. The rest, as they say, is history.

The movie was released as Rocket to the Moon in the USA. The UK preferred the literal translation Woman in the Moon.

Alternative Title(s): Frau Im Mond, The Woman In The Moon