Film / The Woman of My Dreams 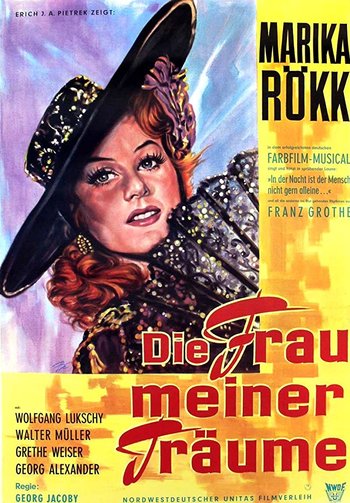 The Woman of My Dreams (German: Die Frau meiner Träume) is a 1944 German comedy film with music numbers, directed by Georg Jacoby and starring singer/dancer/actress Marika Rökk. The cast also included Georg Alexander, Wolfgang Lukschy and Walter Müller. It was the second color motion picture to star Rökk after Women are the best Diplomats in 1941 — both films used the Agfacolor technology — as well as one of the most expensive films to be produced in National Socialist Germany.

Julia Köster is a glamorous revue star. Seeking to escape a conflict with her theatre manager, she boards a train. She gets off the train in the mountains, and it departs, leaving her in the wilderness without her suitcase and dressed only in her fur coat over her underwear. She is rescued by two train engineers, who happen to be fans of her songs on the radio without ever having seen a picture of her. She then decides not to reveal her true identity to them just yet.

The Woman of My Dreams provides examples of: