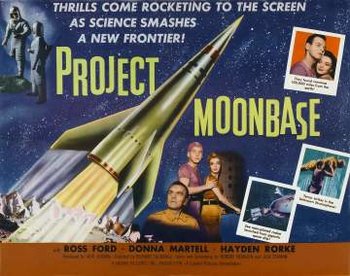 In the futuristic world of 1970, the United States Space Force — having established an orbiting space station — readies a reconnaissance mission to survey the Moon for a future base. The assigned mission commander, Major Moore (Ford), is annoyed to find that his co-pilot has been replaced with the more famous Colonel Briteis (Martell). Unfortunately, the two of them have more serious problems to worry about, as the sinister enemies of Freedom have replaced their photographic specialist with a saboteur who is tasked with destroying the space station. When the imposter is uncovered, his desperate struggle with Moore sends the rocket off course, forcing them to land on the moon, thereby establishing America's first lunar base.

Based on a story by Robert A. Heinlein (who shares screenwriting credit with producer Jack Seaman) and shot in ten days (sharing sets and costumes with Cat Women of the Moon, released one day earlier), this low-budget attempt to portray a bold, exciting future of Interplanetary Voyages, female presidents, and orbiting H-bombs is let down by a mediocre plot and what can only be described as a cringe-inducing portrayal of America's first woman in space; Colonel Briteis (not "bright eyes!") a spoilt, bratty symbol of '50s misogyny.