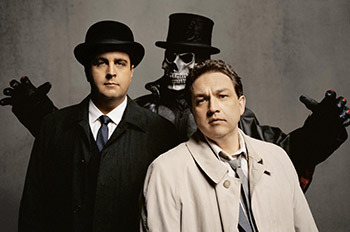 "Hello, this is Edgar Wallace his neighbor!"
Advertisement:

In West Germany of the 1950s and 1960s, a popular movie series based upon the crime stories of British author Edgar Wallace, known as the Edgar Wallace Films, was produced, and it still has a cult following. Catering to this cult following (while still remaining funny for people not knowing these movies) the German comedians Oliver Kalkofe, Oliver Welke and Bastian Pastewka produced the Affectionate Parody Der Wixxer in 2004 and its sequel, Neues vom Wixxer, in 2007.

The dualogy deals with the Scotland Yard inspectors Very Long (Pastewka) and Even Longer (Kalkofe), who are trying to arrest a masked super-criminal known as the Wixxer.