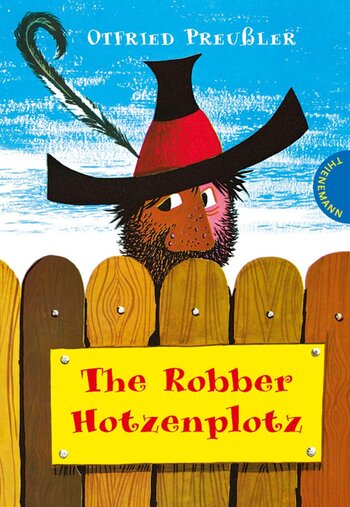 The Robber Hotzenplotz is a German children's book by Otfried Preußler, also famous for his adaptation of the Krabat legend and other works like The Little Witch and The Adventures of Strong Vanya.

Set in an unspecified (but certainly pre-World War I, and pretty technology-free) past Germany, it's essentially a Kasper (German equivalent to Punch) story: It has Kasper, his best friend Seppel (Joseph), Kasper's grandmother, a policeman, a robber, a sorcerer, and a fairy godmother. And even a crocodile (although it's really a polymorphed dachshund). But no Love Interest for Kasper or Seppel, however.

The plot: One day, the robber Hotzenplotz steals the grandma's most favorite thing - her coffee mill which can play a song when used - so her grandson Kasper and his friend Seppel develop a plan how to get it back. After this mundane start, the story also involves fantasy elements like a sorcerer and a fairy godmother, which may come as a surprise to some folks.

There are several film adaptations based on it, one of them featuring Gert Froebe as the robber. And even a theatre play.

The Robber Hotzenplotz provides examples of: