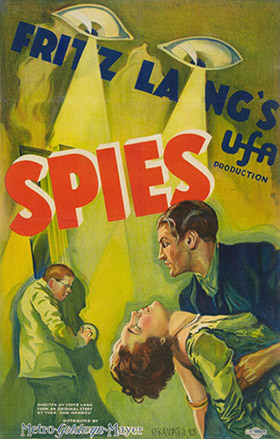 Spies (Spione) is a German silent film from 1928, directed by Fritz Lang. Lang's next-to-last silent film, it tells the story of a nefarious spy ring headed by Haghi (Rudolf Klein-Rogge, one of Lang's regular actors), who masquerades as a banker (with his spy ring as the bank). One of Haghi's operatives, the beautiful Russian spy Sonia, has compromised an Army officer, Col. Jellusic, and is buying secrets from him. At the same time, Haghi's group is trying to obtain a copy of a secret treaty between Great Britain and Japan.

An agent from the Secret Service known only as Number 326 (Willy Fritsch) is hot on the trail of Haghi's spy ring. However, Haghi knows all about him, and assigns Sonia to seduce him and compromise him. This plan goes awry when Sonia falls in love with #326. Meanwhile, another of Haghi's pretty female spies is worming her way into the household of the Japanese ambassador who is about to sign the treaty.