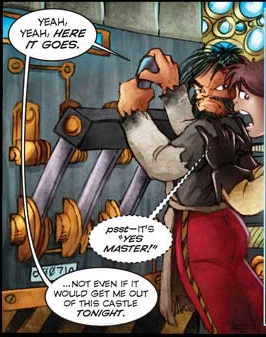 Besides, he's the one holding all the power.
Advertisement:

When you want to activate a Weapon of Mass Destruction, a Mad Scientist's invention, an electricity-based method of execution (especially an electric chair), or other badass electric device to be suitably dramatic, you have two options. One of them is the Big Red Button, and the other is the old-fashioned electric switch with a huge handle, which sends sparks flying when activated. Called a "knife switch" in supply catalogs and that other wiki.

While the Big Electric Switch is obviously common in Steampunk and period pieces (including neo-retro Film Noir pastiches like Sin City), it can make surprising appearances even in technologically advanced contexts, despite the obvious anachronism.