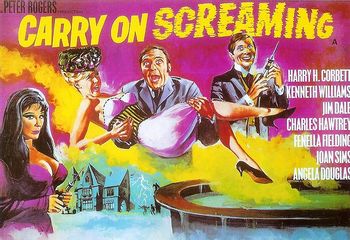 Frying tonight!
"He's been dead 15 years now... but if you come in, I'll ask if he can see you."
— Sockett the Butler
Advertisement:

Carry On Screaming! is a 1966 film from the Carry On series, making it as the twelfth movie made. It starred Harry H. Corbett, Kenneth Williams, Jim Dale, Charles Hawtrey, Fenella Fielding, Joan Sims, Angela Douglas, Peter Butterworth, and Bernard Bresslaw in the series' take on Hammer Horror.

The movie is set in Edwardian times, telling the story of a young woman named Doris Mann (Douglas) who was abducted by a monster called Oddbod (Tom Clegg) from her lover Albert Potter (Dale). Two detectives, Detective Sergeant Sidney Bung and Detective Constable Slobotham (Corbett and Butterworth), find the creature's finger, and conclude that it's the same case that they've been receiving numerous times. The three of them search for more clues and find a house, home to strange butler Sockett (Bresslaw), attractive mistress Valeria (Fielding), and her electrical brother Dr. Orlando Watt (Williams), who scare them away.

The next day, the trio interview Dan Dann (Hawtrey), a lavatory attendant, but he is killed before he can reveal anything. In fear of being discovered, the creepy siblings create a potion to turn one of the detectives into a hunched-over sniveling alter-ego, ordering him to steal a mannequin that looks suspiciously like Potter's lover, leading the Sidney to possibly link two-and-two together. His wife Emily (Sims) is convinced that he's having an affair after he wakes up, so she secretly plots vengeance and follows them, getting dragged into the plot in the process.