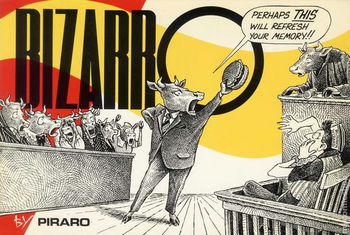 Bizarro is a one-panel gag Newspaper Comic drawn by Dan Piraro since 1986.
Advertisement:

It is a little like The Far Side in its scope, but with a different style and approach, including conventional jokes and absurdity. That being said, the occasional Non Sequitur is not unheard of. The comic has no recurring characters or ongoing plot, though Piraro sometimes draws characters looking like himself or his wife. There are however a set of recurring symbols that are inserted into strips Just For Fun.

that is more or less regularly updated with new strips. There is also a website

Has no relation to Bizarro, Superman's reverse-logically-thinking counterpart, from the Superman multimedia franchise.