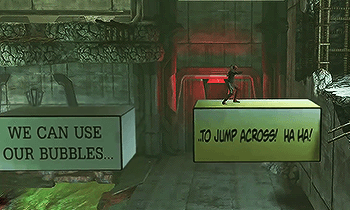 Normally, it would just be Paratext, or a basic building block of the fiction. But somehow, something used to construct the work — the font of the text, or the formatting, a cute yellow thought/narration box or a dialogue balloon, quirks of spelling, the edge of the filmstrip — is incorporated into the text, where the characters can interact with it. When this happens, that item becomes a Metafictional Device.

Sometimes this involves Breaking the Fourth Wall; other times, it doesn't occur to anyone to wonder why that pretty thought balloon is visible, and it becomes more of a Strange Loop or Painting the Medium.