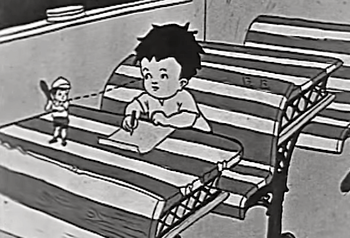 Bobby has an Imagine Spot in "Bobby Bumps Starts For School"
Advertisement:

Bobby Bumps was a cartoon character from The Silent Age of Animation who starred in dozens of cartoon shorts from 1915 to 1925. He was one of the first animation characters to star in an extended series, rather than a one-off short.

Bobby has often been described as a proto-Bart Simpson. He is a mischievous little boy who is often pulling pranks and getting into trouble. Accompanied by his dog Fido, and usually carrying his trusty slingshot, Bobby is often antagonizing either his bald, short-tempered father, a local policeman on the beat, or other grownups.

The Bobby Bumps character was invented by animator Earl Hurd. Hurd, along with his producer J.R. Bray, invented something even more important than a character: the process of cel animation. Previous cartoons had been directly drawn to paper, but the labor-saving use of cels, patented by Hurd and Bray, became near-universal in the industry.