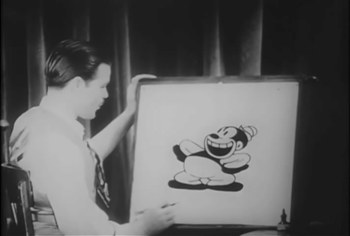 "Well, here I is, and I sure feel good!"
Advertisement:

Bosko, the Talk-Ink Kid is a 1929 short cartoon directed by Hugh Harman and Rudy Ising. It is the pilot film for the entire Looney Tunes franchise, and the debut of Bosko, the Talk-Ink Kid. The film is notable for being one of the earliest (if not the first) attempts at synchronizing spoken dialogue with animation.

The cartoon starts with an unnamed cartoonist (depicted by animator Rudy Ising) drawing Bosko on a sheet of paper, who springs to life in front of his eyes. The cartoon (voiced by Carmen "Max" Maxwell) introduces himself as Bosko, and the cartoonist asks Bosko if he can perform tricks for him and entertain the (offscreen) audience, which he agrees to do.

Obviously, the film won over Leon Schlesinger, and the Looney Tunes series was subsequently greenlit, with the series officially launching the following year with Sinkin' in the Bathtub. The cartoon was never released theatrically, and was only intended to be a privately-screened pilot for the series. It eventually fell into the Public Domain and can be found online, as well as the first volume of the Looney Tunes Golden Collection DVD series. Cartoon Network also aired a cut-and-sped-up-for-time version of this short as part of their ToonHeads special about lost, rare, and obscure Warner Bros. works (ToonHeads: The Lost Cartoons).