Western Animation / Sinkin' in the Bathtub 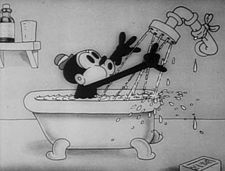 "Hello, Bosko!" (giggles)
"Guess what I g-g-g-got for you, Honey!" (holds out flowers, goat eats them and Bosko starts sobbing)
"Don't cry, Bosko! I still love ya!"
—The first (and handful) of lines in the cartoon.
Advertisement:

"Sinkin' in the Bathtub" is the very first short in the Looney Tunes series, released in 1930, starring Bosko, the Talk-Ink Kid and made by Hugh Harman And Rudolph Ising for Warner Bros. However, this was not the first appearance of Bosko — he first popped up in an unreleased 1929 pilot film.

The plot, if it can be called that, starts with Bosko taking a shower, approriately whistling to the tune of "Singing in the Bathtub". After some antics in the tub, along with the tub coming to life and ripping apart toilet paper, Bosko goes for a ride in his car to visit his sweetheart Honey. After a bit of serenading, they go off for an afternoon ride and Hilarity Ensues.

Tropin' in the Bathtub: