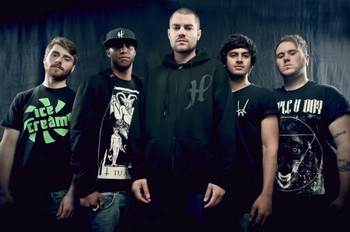 Left-to-right: Richard, J, Ben, Josh, Timfy James
Hacktivist are a British rap-djent-grime-nu-metal band from Buckinghamshire, England formed in 2011. They initially started off as a project between Jermaine "J" Hurley and Timfy James after leaving his former band Heart of a Coward, but the positive reception encouraged them to recruit a full lineup. This lineup had been remaining the same since formation until January 2017 when Ben Marvin decided to leave the band.
Advertisement:

Their style, as mentioned above, is distinctive to say the least. They've drawn comparisons to the likes of Meshuggah, Korn, Limp Bizkit, and Jay-Z. Some call them "rapping over djent", while others say they're a "nu metal take on grime". However, despite playing a bunch of divisive genres, the reception has been largely favorable. With complex instrumentation, great rhyme schemes (helped by the fact that they maintain their accents which makes them that much more endearing), and lyrical themes that differ from the norm, they've carved out a name of their own in the metal industry. Some even consider them to be the true successor to Rage Against the Machine.

Set the begginging of tropes