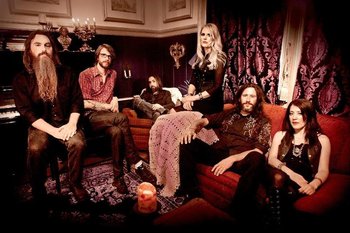 Hammers of Misfortune are an American Progressive Metal band from San Francisco, California. The group was founded by John Cobbett, ex-guitarist of Slough Feg, under the name Unholy Cadaver before naming themselves after a song on their demo EP. Starting as a Death Metal band, the group had long since began to incorporate Heavy Metal, Doom Metal, and Folk Metal to their sound, among other genres of music.

Hammers of Misfortune provides tropes for: