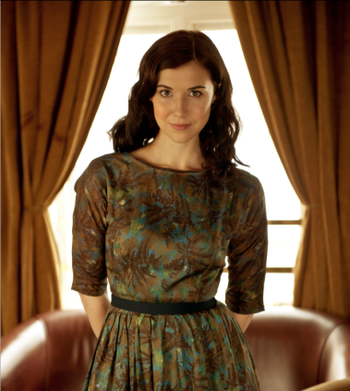 Lisa Margaret Hannigan (born 12 February 1981) is an Irish folk rock singer-songwriter, best known for her use of antique (and often broken) instruments such as the pump organ, her work with Damien Rice, Aaron Dessner, and Gary Lightbody, her (progressively Darker and Edgier) albums Sea Sew (2008), Passenger (2011), At Swim (2016), and Live in Dublin (2019), and her contributions as the voice actress of Bronagh in Song of the Sea and Blue Diamond in Steven Universe. She has also contributed vocalizations to the soundtrack of Gravity, along with covers of traditional Irish folk songs and works by David Bowie and Stephen Sondheim to Fargo, The Hole in the Ground, Legion (2017), and a notable clown-themed Mercedes-Benz commercial.

She grew up in suburban Dublin, her primary vocal inspirations being Nina Simone, Joni Mitchell, Dolly Parton, Nick Drake, Björk, Juliana Hatfield, and Michael Jackson, among others. She dropped out after studying English and French literature, classical singing and art history at Trinity College Dublin, upon meeting Rice in 2001. She was integral to the recording of a series of critically acclaimed hits by Rice, but he fired her before a European tour concert in 2007. She currently resides in Dublin as of 2020, and does a podcast called "Soundings

Tropes in her works include: