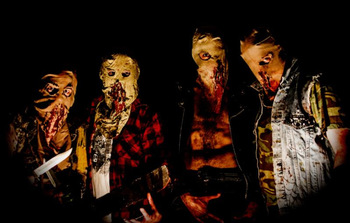 "We'll pickle your brains in a jelly jar!"
Advertisement:

Ghoul is a very theatrical thrash/death metal band from Oakland, California. They are an Anonymous Band who claim to be four mutants hailing from the land of Creepsylvania, a country in Eastern Europe that lives up to every horror trope known to man. The band play old school style thrash metal with elements of death metal, grindcore, and occasionally surf rock and doom metal, and write about the land of Creepsylvania and their lives as ghouls, as they play heavy metal, mosh, and scare people. Over the course of their discography, they introduce a recurring cast of characters and even a sort of ongoing storyline, that gleefully embraces every horror and metal trope in the book and turns it Up to Eleven.

Several members of the band also perform in the group Impaled, with Sean and Ross in particular having sung and played their respective instruments on all albums from both groups. They are fairly similar stylistically, with the main difference being their more straightforward Death Metal sound as opposed to Genre-Busting death/thrash. Ross also performs bass and additional vocals in Exhumed, having been a member during the making of their first album before leaving in 1999 and rejoining in 2016.