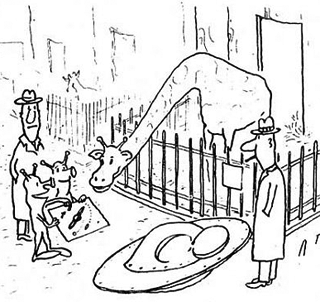 "Dogs are the leaders of the planet. If you see two life forms, one of them's making a poop, the other one's carrying it for him, who would you assume is in charge?"
— Jerry Seinfeld, Seinfeld
Advertisement:

So let's say that the aliens land tomorrow. It's not an Alien Invasion (not even a well-meaning one); this group of aliens geniunely comes in peace. After recovering from the initial shock of realizing that, yes, other lifeforms do exist out there, the governments of the world decide to allow them to land — which they decide to do in your back yard.

Everyone important shows up — the President, the news crews, foreign ambassadors, UFOlogists, the mayor, and the local high school marching band. You're there, of course — it's your yard, after all, and no one's going to evict you just because some aliens are coming to town. Your pet rottweiler is there, too, chained up beside its doghouse and its water dish.

As the aliens' Flying Saucer lands, the crowd "ooh"s and "ah"s just like crowds do. The hatch opens, and the aliens step out, repeating their message of goodwill — to your rottweiler.

What happened here? The aliens Mistook the Dominant Lifeform of Earth, that's what.

This is a common subversion of the typical First Contact scenario. The aliens, in their studies of Earth, conclude that a non-human species are the real masters of Earth. Maybe they assume that we're the servants of our pets rather than mere caretakers. Maybe they're mechanical beings who aren't used to dealing with carbon-based life and assume that any intelligent beings will be machines like themselves. Maybe they assume that the bigger animals have bigger brains, and therefore more intelligence. Maybe they do possess all the facts, but simply have a different definition of "dominant". Maybe they are biased by first impressions, since they saw the other animal species first and found it very impressive while they haven't had observations that gave them a positive impression of humans. Either way, the results are usually quite amusing.

Granted, humans might make the same assumption on another planet. The parrot-like thing riding on that humanoid's shoulder may actually be the master, with the humanoid being its mount. Or it might be that the spaceship itself is in charge, and the aliens disembarking are merely messengers.

Many parodies or humorous examples of the trope may include the revelation or implication that the lower animal actually is the dominant or superior species (at least in their own eyes).

See also Mistaken for Servant, which is a more mundane trope which sometimes overlaps, and Humans Are Not the Dominant Species.

When Crypto tries making first contact, he mistakes cows for the dominant lifeforms.

When Crypto tries making first contact, he mistakes cows for the dominant lifeforms.