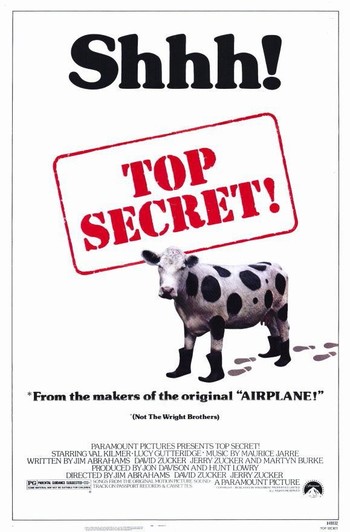 It's Airplane! with spies!
Nick Rivers: Listen to me, Hillary. I'm not the first guy who fell in love with a woman that he met at a restaurant who turned out to be the daughter of a kidnapped scientist, only to lose her to her childhood lover who she last saw on a deserted island, who then turned out fifteen years later to be the leader of the French underground.
Hillary Flammond: I know. It all sounds like some bad movie.
[long pause; both look at camera]
Advertisement:

Top Secret! (1984) is the third feature-length comedy written by the Zucker, Abrahams and Zucker team and the follow-up to their directorial debut, Airplane!.

The story involves Nick Rivers (Val Kilmer, in his first theatrical role), an Elvis-like rock idol who's sent into East Germany for a goodwill tour. Once there, he is swept up into a spy plot by Hillary Flammond (Lucy Gutteridge), whose father (Michael Gough) is held captive by the Communists. Hillary takes Nick to the French Resistance—yes, in East Germany!—whose charismatic leader, Nigel "The Torch" (Christopher Villiers), is her former lover, and who seizes on the opportunity to use Nick's knowledge of the prison to break Dr. Flammond out.

That's the plot, but the movie is perhaps better appreciated for its farcical, even savage zaniness. It parodies everything, from rock idols to forced perspective shots to Professional Wrestling to goose-stepping Nazis to, well, cow disguises, with the ZAZ team's trademark Rapid-Fire Comedy.

Has nothing to do with Over-the-Top Secret, or indeed any kind of classification whatever.

"And I'll miss you most of all, Scarecrow!"
Feedback

That's not a foreground close-up shot.

That's not a foreground close-up shot.