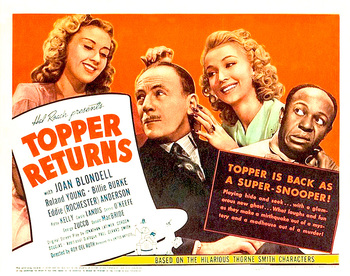 Topper Returns is a 1941 film directed by Roy Del Ruth.

It is the second sequel to 1937 hit film Topper. Ann Carrington (Carole Landis) has just come to California on the occasion of her 21st birthday, when she is to inherit a large estate from her late mother. Tagging along for companionship is her sassy best friend Gail (Joan Blondell). Someone apparently doesn't like this, as a mysterious cloaked sniper shoots out the tires in the taxi whisking Ann and Gail along the Pacific Coast Highway. The taxi wrecks but Ann and Gail are unharmed. They hitch a ride with...one Cosmo Topper, who lives nearby.

Cosmo and his valet (Eddie "Rochester" Anderson) drop off Ann and Gail at the Carrington mansion. Mr. Carrington is delighted to meet the daughter he hasn't seen since she was a small child. That night, however, the same mysterious cloaked figure intrudes into Gail's bedroom and stabs her to death. Gail's ghost rises from her body and, because the plot demands it, seeks out Cosmo Topper. Once again, Cosmo gets ensnared with a wacky ghost, as Gail demands Cosmo's help in finding out who killed her.