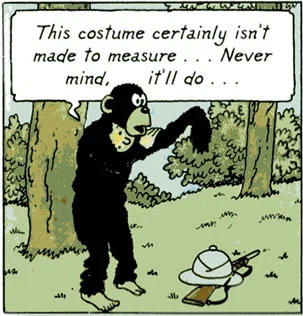 By the way, that's the skin of an actual monkey.
Advertisement:

A person needs a disguise for whatever reason, and decides that the best option is an animal suit. Common reasons include: the person wanting to hide among a group of animals, or the person wanting to scare someone (as a prank or as a "Scooby-Doo" Hoax). The animal suit is sometimes an elaborate costume, but more often it is the skin of an actual dead animal. Though it is often a Paper-Thin Disguise, but nevertheless it generally successfully fools someone. Apes and bears are common choices, due to their generally human-like body shape, but any animal works. Larger, quadrupedal animal disguises can be worn by two people, in which case the examples overlap with in-universe examples of Pantomime Animal. Donning such a disguise may lead to Attractive Bent Species if a real animal with amorous intentions is fooled by it.

Needless to say, a person putting on an animal skin and pretending to be a real animal would look generally very unconvincing in Real Life - not only would it be difficult to seamlessly put on the skin, but also humans have very different skeleton and musculature from any other animal.

Often worn by a Master of Disguise. Compare Ass in a Lion Skin, which is an animal disguising itself as another species of animalnote though, in the scientific sense, humans are animals, and Embarrassing Animal Suit, when it's obviously a person wearing the animal suit and finds it rather humiliating. Also compare Animorphism, when the character actually turns into an animal instead of simply donning an animal suit. Human Disguise is this trope inverted. Not to be confused with People in Rubber Suits, where animals are played by actors in animal suits, but in the context of the movie they are actual animals. Also not to be confused with fursuits, which are animal costumes worn by the Furry Fandom not as a disguise, but as a hobby.