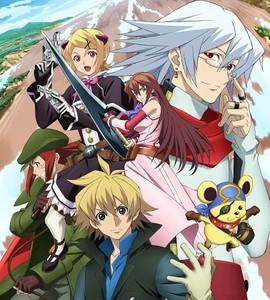 In a World… where beastmen are the dominant species and normal humans are treated like second-class citizens (or worse), a girl named Morte claims to want to destroy this world. Wielding a large weapon in one hand and a sphere called the "Destruct Code" in another, she is the leader of the one-person "World Destruction Committee." Reluctantly joining her in this quest are a human boy named Kyrie who used fake cat-ears to get a job until Morte accidentally revealed his identity, and a short bear named Toppy.

However, the beastmen have their own "World Salvation Committee," an armed group which seeks to capture or kill Morte before she can figure out how to unlock the Destruct Code.

Originally a Nintendo DS game that received an Animated Adaptation.

There are two kinds of Tropers...kuma