Dragged by the Collar 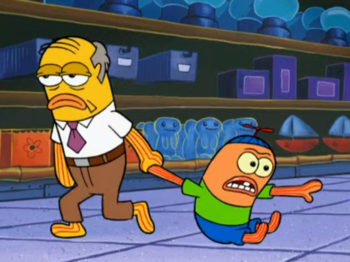 What do you do when somebody's being stubborn or trying to excuse themself from a sticky situation? Force them into it by dragging them away by their collar, of course!

Getting dragged by the collar is often used as a comedic device, most often in anime (though it does pop up in Western Animation sometimes). The "victim" would, more often than not, be trying to escape an embarrassing predicament (of his own doing) before another person grabs him and drags his butt off to whatever mess awaits him. The victim's loud protests and flailing of arms are optional. Small variants include getting dragged while standing (with the heels skidding on the ground instead of the butt), and stiff, outstretched arms. Sometimes, instead of the collar, characters are dragged by their cheeks, ears, arms, or legs. This is not always used for comedy, however, especially when the one being dragged away is unconscious, injured, or in severe cases, dead.

See also Necktie Leash (which is similar to this, only done for flirtatious or sexual reasons). Compare Possessive Wrist Grab where a character aggressively grabs another's wrist in a display of dominance and The Load in which the victim actually wants to tag along, but the other characters won't let him. The Drag-Along is a metaphorical version (a character who doesn't want to join the adventure) but may well literally overlap with this trope. For a Darker and Edgier version of this trope, where the very act of dragging causes injury or even the death of the victim, see What a Drag or Ankle Drag, where the person is dragged by the ankle specifically and the person is rarely dragging them for their own good.