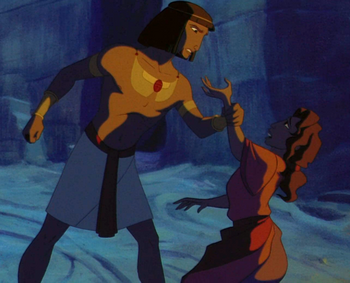 'Let my people go' means you too, Moses.
Advertisement:

In many works, especially involving a male and female as prominent characters, one character will grab the other's wrist in such a way that the character's dominance is expressed to the audience. Inversely the grabbed character appears weaker by comparison, or less powerful.

Some characters, usually male, assert possessiveness, whether intentional or not, by grabbing the wrists or arms of another character. Even when the characters' genders are the same, or reversed, the effect still remains.

Values Dissonance may cause this trope to be seen as offensive to some, but waved off, consequence-free, and even used in a romantic context in another region. This most often occurs in works where the culture of origin is patriarchal where gender roles are more prominent or even enforced.

Compare Caught the Heart on His Sleeve, Dragged by the Collar, Angry Collar Grab, and the Standard Female Grab Area in which it describes the phenomenon as it applies to combat situations.

See also Headlock of Dominance in which it applies to fights being dominated by a character who's got others in a headlock.