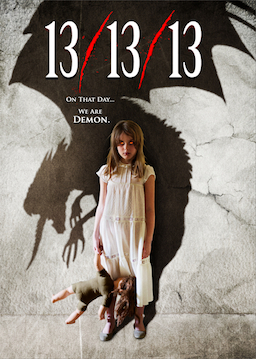 Neither the cover image nor the tagline have anything to do with the movie.
Advertisement:

13/13/13 is a 2013 horror movie by The Asylum. It follows an ex-cop named Jack who, after coming home from a fishing trip with his friends, finds his ex-wife trying to commit suicide by scratching away all of the skin on her arm. He rushes her off to the hospital and things get worse. It seems that today is 13/13/13 as a result of leap year and the world has gone crazy. Jack, and a woman he meets, Candice, seem to be the only ones not affected. Now, Jack needs to fight his way through this world of crazy people to find his daughter, Kendra, and save her.