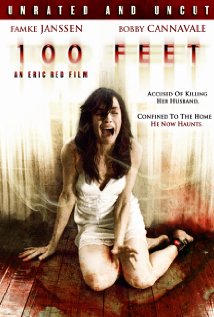 100 Feet is a 2008 Horror Film directed by Eric Red and starring Famke Janssen (Marnie Watson), Bobby Cannavale (Lou Shanks), Ed Westwick (Joey) and Michael Pare (Mike Watson). It was produced by Syfy and distributed by The Asylum after its film release.
Advertisement:

Janssen plays Marnie, a woman who has just been released from prison years after killing Mike, her police officer husband, in self-defense. She is returned to the house she shared with her husband, but is under house arrest, unable to get more than 100 feet away from the transmitter. Her neighbors won't talk to her and Shanks, her husband's former partner, harasses her and keeps her under surveillance. Worse, her husband's ghost hasn't left and he wants revenge.