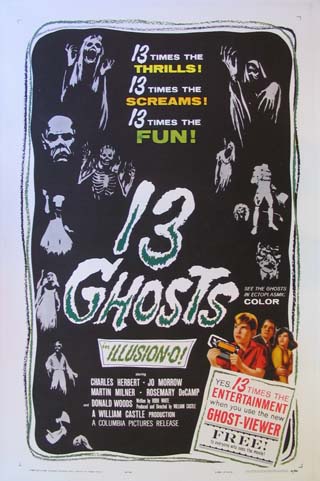 13 Ghosts (1960) is a horror movie directed by William Castle, written by Rob White, and starring Donald Woods, Margaret Hamilton, and Martin Milner. It was filmed in "Illusion-O", allowing viewers to see the ghosts using special glasses made of red and blue cellophane; viewing them through the red filter made them visible, while watching through the blue filter made them vanish. (It is worth noting, though, that the ghosts were quite visible without using the red filter.)

The film concerns Cyrus Zorba, whose occultist uncle Dr. Plato Zorba has willed a huge, ramshackle house to Cyrus and his impoverished family, fully furnished and outfitted with a housekeeper, plus a fortune in treasure. Now for the bad news: This house is haunted by twelve ghosts, who are imprisoned there, waiting for an unlucky thirteenth ghost to free them. The only way to see the ghosts is with special goggles left behind by Dr. Zorba. In addition, there is a more mortal peril in the house with them, in the form of someone who wants to claim Zorba's money for himself, and is willing to kill its rightful heirs to steal it.