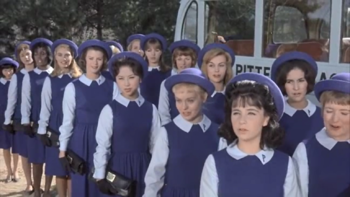 Seriously, there are fifteen girls here. Count 'em!
13 Frightened Girls, also known as The Candy Web, is a 1963 spy film directed by William Castle. The titular gals, of whom there are actually fifteen, are the students at a school for the daughters of diplomats from around the world. Each girl represents a different country. The film focuses on Candy Hull, the American girl, as she becomes an Amateur Sleuth involved in Cold War espionage.
Advertisement:

Castle's gimmick for this film involved generating publicity with a worldwide talent search for the young actresses who would fill the title roles. Many are not actually from the countries they're supposed to be representing. Also, the overwhelming majority of the girls are Bit Characters at best, with Candy herself and the Chinese girl Mai-Ling being the only ones of any real prominence in the story.