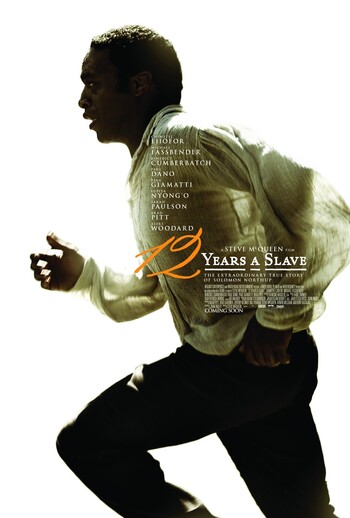 "I will survive. I will not fall into despair!"
Advertisement:

Twelve Years a Slave is a title that refers both to the 1853 memoir by abolitionist Solomon Northup and its 2013 film adaptation (with the "twelve" formatted as a number), directed by Steve McQueen and written by John Ridley.

Solomon is a violinist in Saratoga, New York in 1841. He's a loving husband, a devoted father, a respected man of his community — and a free-born black man. One day, two men calling themselves Hamilton and Brown entice Solomon to come with them on a tour of cities and counties further south, where Solomon would play for circuses and concert audiences, and win plenty of money if he only just kept going South. A little further South. And in Washington D.C...

...Solomon wakes up with chains around his ankles and wrists, and is told that his life is no longer his own. He is now "Platt" — nothing but a Georgia runaway slave.

Thus begins twelve years of misery, agony, and punishing work as Platt is sold from master to master, and finds himself traversing the South and experiencing the horrors of slavery firsthand. Still, he desperately holds on to hope that, somehow, he will win his way to freedom and back to his family. But the years drag on...

Upon the original memoir's release, at a time when "bestselling" was defined as two to three thousand copies sold, Solomon's story sold more than thirty thousand copies. It was and is considered a definitive work of the time, both for its accurate, no-holds-barred depiction of slavery, and for shocking the people of the North, who were mostly ignorant of slavery in the South. It was likely a contributing factor to The American Civil War, insofar as it caused serious questions to be raised about the practice of slavery and the treatment of slaves.