Series / You Are Beautiful 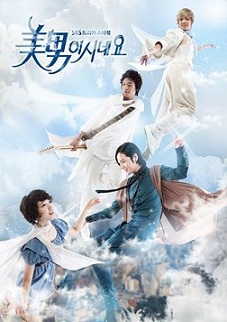 You Are Beautiful, sometimes translated as He's Handsome or He's Beautiful, is a 2009 Korean Series Romantic Comedy about a girl named Go Mi-nyeo, played by Park Shin-hye, who is pulled out of a convent to impersonate her identical twin-brother, Go Mi-nam, and take his place in a boy band called A.N.JELL while he gets his plastic surgery fixed. Members of this boy band include:

As Go Mi-nam, Mi-nyeo has to hide her identity while trying to succeed as a pop idol. Comedy, romance and drama abound.

This is one of the most successful collaborations with screenwriters, The Hong Sisters.

You Are Beautiful provides examples of: