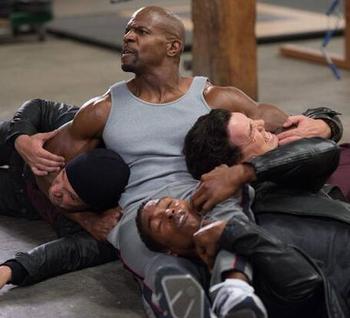 A schoolyard staple, the headlock is a fighting move where victim's head is pinned between the assaulter's arm and body. When someone is put (and held) in a headlock, it's usually a sign that the fight is being completely dominated. The holder can punch the person you've got in a headlock for added dominance, or capitalize that his mouth is near the victim's ear to speak to him.

This is Truth in Television: a chokehold performed from the victim's back is probably the most dominant submission move in martial arts, as it allows the user to apply a large amount of pressure on the opponent's neck while reducing greatly the latter's capability to fend it off, and an expert grappler can leave his victim unconscious mere seconds after locking the technique. It is often subverted in fiction, because most examples don't actively try to choke the victim and are content with just squeezing them a bit, but it is still a good way to represent physical superiority in a few moves.

The move is commonly associated with The Bully, both in real life and in fiction. It's also often a sign of a Curb-Stomp Battle.

See also Possessive Wrist Grab where a character grabs anothers wrist in which it displays dominance.