Manga / The Feelings We All Must Endure 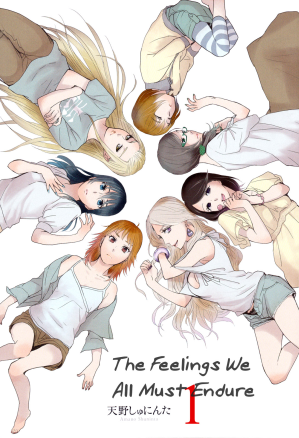 Clockwise from the top: Fueko, Asuna, Meru, Remi, Ruki, Sachi, Maasa
The Feelings We All Must Endure (or Watashi Sekai o Kouseisuru Chiri no You na Nani ka. in original Japanese—lit. "What Is Like Dust That Makes Up My World.") is a Slice of Life Yuri Genre manga by Shuninta Amano, which ran in Yuri Hime from 2011 to 2013.
Advertisement:

The story follows seven college students entangled in a complicated and sometimes painful web of relationships and desires. Much of its plot is driven by the main characters' exploration of their relationships and sexuality, as well as finding out what exactly motivates each of them to behave in the way they do.