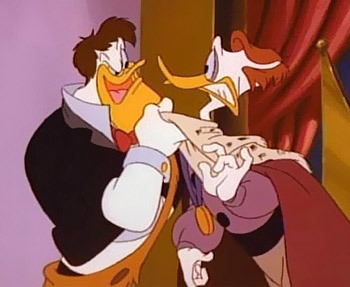 During a heated conversation an enraged character will grab another character by the collar, typically with both hands, pull them close and shout something dramatic right into their face.

This move is likely to be used as part of a Jack Bauer Interrogation Technique or when making somebody come to their senses. Might be followed by a Minion Maracas.

Compare the more intense Neck Lift, where one character grabs another character by the neck and actually lifts them up, and Villainous Face Hold, where it's the face that's grabbed contemptuously. See also Dragged by the Collar, Necktie Leash and Shake Someone, Objects Fall.