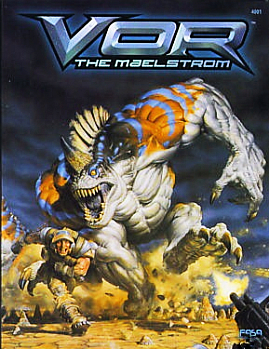 Just another day in the Maelstrom: a bad one.
Advertisement:

VOR The Maelstrom is a miniatures combat tabletop game by Mike Nielsen, published in 2000 by FASA, months before it collapsed. A subscription was launched in 2010 for a new edition, but it failed, probably due to Mike Nielsen setting his goal too high.

VOR was conceived as the ultimate create-your-own-army game. Although several official armies exist and were released with many models, what made its success was the possibility to design forces with almost any model. A "scratchforce sourcebook" was expected - some beta version of it came out as PDF.

The setting of VOR is the Maelstrom, which looks like a miniature galaxy orbiting a gigantic black hole, called the Maw or Vorack. Planets that cross the dimensional threshold around the Maelstrom are doomed to end in the Maw, so everybody tries to leave their homeworld, found colonies and, maybe, someday escape the Maelstrom. Earth is trapped in 2102.

See this other wiki

Not to be mistaken for the Vorkosigan Saga, which has a book called The Vor Game.

This tabletop war-game provides examples of: