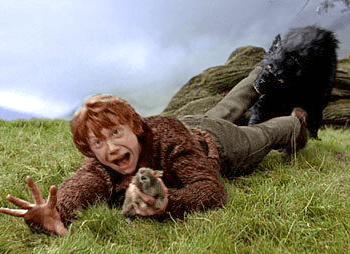 Alice is walking alone through the forest/haunted house/whatever when suddenly she hears a noise. Ominous music starts playing as she looks around, obviously scared. Then suddenly, something knocks her down and starts to drag her away by the ankle. She screams for help, kicks at whatever it is and tries to grab hold of something, desperately digging her fingernails into the ground as she goes. Expect a final scream as she disappears into the shadows.
Advertisement:

A variation occurs in a swamp or lake, where something suddenly latches onto Alice's ankle and instantly pulls her beneath the surface. This is often followed by an underwater shot showing Alice struggling and flailing before she either drowns or manages to break free.

The key point here is the fact that Alice is always dragged away by her ankle, never by any other body part.

May lead into a horizontal Take My Hand!-like scenario as Bob tries to rescue Alice. Sometimes subverted via Giving Them the Strip if the victim's footwear comes off in the attacker's grip.

Alternatively, a hero or antihero who intends to be Dressing as the Enemy may haul off a knocked out mook in this way, so that he can hastily steal their uniform.

Near the end of the movie Rio 2, Gabi drags Nigel off into the jungle to shower him with affection after finding out that she is not actually poisonous.

Near the end of the movie Rio 2, Gabi drags Nigel off into the jungle to shower him with affection after finding out that she is not actually poisonous.