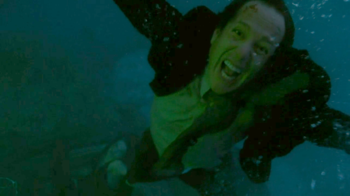 "This man drowned. You're looking at me like you hope that there's something more, but there isn't."
Written by Chris Carter & Frank Spotnitz
Directed by Kim Manners
Follmer: If I may be blunt, Sir, Doggett's put his tit in the wringer.
Kersh: Maybe. So what?
Follmer: All of think he's lost all judgement. That not one man's actions should affect the entire FBI. We're feeling he should be called out for this.
Advertisement:

Two days after the season eight finale, Mulder vanishes and Doggett and Reyes conduct an investigation into Kersh and the events surrounding William's birth.

"Looks like you and I are chasing the same man."