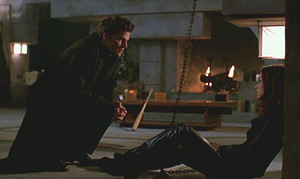 Buffy is having a nightmare in which she is underwater, with Finch pulling her down by the ankle. She struggles to the surface, only to have Faith shove her down again. She wakes up in her sheep pajamas and goes down the hall, where her mom is watching the news in her bedroom. Finch's body has been found and identified, and the Mayor promises justice.

That day at school, Wesley orders Faith and Buffy to investigate Finch's murder. Cordelia interrupts, needing books for psychology. Buffy and Faith go to an empty classroom, where Buffy insists that they have tell the truth. Faith disagrees, and warns that Buffy is just as culpable. Back in the alley, Detective Stein (last seen on "Becoming, Part 2") and some other police are gathering evidence. Angel is observing, and remembers seeing the blood on Buffy's hand. He starts shadowing the cops and discovers the Slayers' involvement.

At City Hall, Mayor Wilkins is shredding the paper trail of evidence that Finch has left behind, and he wonders if Finch was going to betray him. Trick has good news, though—the coroner's report shows that Finch was killed with a pointed wooden object, which implicates the Slayers. The Mayor is jubilant.

Later that night, Faith and Buffy break into Finch's office to investigate why he was in that alley. They finds that all of his file folders have been emptied. When they start to leave, they see the Mayor and Mr. Trick together. Back on the street, the girls bicker over Faith's cavalier attitude toward law and order; Faith suggests that they can do whatever they want because they're Slayers, and therefore superior.

Buffy goes to the library to confess, only to find that Faith has made an end-run around her and talked to Giles first. Faith says it's OK, she told Giles that Buffy killed Finch. Giles barks at Buffy to get in his office. Once Faith is gone, he confides that he doesn't believe Faith's bogus story, but felt he should humor her to keep her from doing anything rash. This kind of 'accident' has happened before with Slayers; however, Giles tellingly doesn't want to get the council involved. Naturally, Wesley is outside the office, eavesdropping. He gets on the phone and calls Quentin Travers.

The next day, the gang discusses how to intervene with Faith. Xander offers to talk to her one on one, because he has a "connection" with her (alluding to their one-night stand). The gang do their best to conceal their revulsion. Buffy discourages that idea, explaining that Xander was just a fling to her. Xander, goaded by Buffy's remark, goes to Faith's motel room. He tries to reason with her, but she throws him on the bed, teasing she could do anything she wanted to him, and proceeds to strangle him. Angel bursts in and clobbers her with a bat.

Mansion. Angel has Faith chained up, a captive audience...but he's not making much progress with her. He goes out to the garden, where Buffy is, and says it could take a while. Angel stresses that things are different for Faith now—she's gotten a taste for killing.

At the mansion, Angel tells Faith that he knows the exhilaration of taking a life, and that going down that path will ruin her. Just as it looks like she might actually be listening to him, Wesley bursts in with a couple of burly guys to back him up. Wesley wards off Angel with a cross while the thugs trap him in a net and beat him. Wesley takes the chains off of Faith, only to put her into handcuffs of his own, arresting her under the Council's authority. The Watchers cuff Faith to a bench in the back of a van. When Wesley tells his henchman to tighten her restraints, Faith seizes one hostage, gets free and runs off into the night. Buffy finds Angel, still hogtied, and everyone limps back to the library. Buffy guesses that Faith's next move will be to stow away out of town, and everyone splits up to check the ports.

Sure enough, Buffy finds Faith on the gangplank. Faith is unrepentant, and thinks what bothers Buffy is that she's scared of the fact that she's just like her. As they argue, Buffy spots a falling crate and pushes Faith out of the way, getting pinned by it in the process. Mr. Trick arrives and has Buffy at his mercy ("I hear once you got Slayer, you never go back!"), but Faith stakes him from behind. Poof.

Back in the library, Giles and Buffy are discussing Faith. Buffy says she's not going to give up on her.

At City Hall, the Mayor is getting ready to close up shop, and opens the door to find Faith. She tells him that Trick is dust. "I guess that means you have a job opening." The Mayor contemplates this, invites Faith inside, and shuts the door.