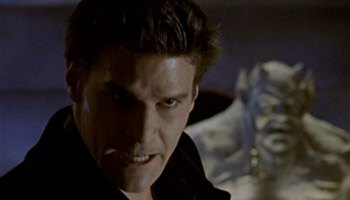 "There's moments in your life that make you, that set the course of who you're gonna be. Sometimes they're little, subtle moments. Sometimes... they're not. I'll show you what I mean."
—Whistler
Advertisement:

Welcome to the first part of Buffy Summers and the Terrible, Awful, No-Good, Really Bad Day.

We start with flashbacks of Angel's history as recalled by an enigmatic demon called Whistler. We see Angel sired by Darla in 1753, and later being cursed with a soul by the Kalderash clan in 1898. Angel is next seen living as a vagrant until he is retrieved by Whistler in 1996, who shows him the one thing that can give his life meaning: Buffy Summers, rookie Slayer. Whistler observes that Buffy is in way over her head, and Angel resolves to watch over her from afar.

In the present, a new artifact has just arrived at the museum: a big stone block. Drusilla kills the museum curator while Angelus and his minions steal the relic, which contains the demon Acathla. A virtuous knight stabbed him in the heart before he could draw a breath, but someone worthy can remove the sword to awaken him. Angelus hatches a plan to awaken Acathla, who will open a gateway to Hell, destroying the world.

Buffy and Willow find the floppy disk containing Ms. Calendar's reconstruction of the curse that gave Angelus his soul. They are eager to attempt it so they can get Angel back. Xander doesn't take a shine to this idea, preferring to see Angelus killed for what he's done, rather than risk leaving him alive merely so that Buffy can have a chance to get her boyfriend back. Meanwhile, Kendra returns to Sunnydale bringing a sword blessed by the same knight who stopped Acathla.

Angelus kills a human and uses his blood in an attempt to awaken Acathla, which fails. He then lures Buffy to him so that his minions can kidnap Giles, whom he plans to torture for the information he needs. In the library, Willow is attempting the curse when vampires swarm the place. The mob is led by Drusilla, who hypnotizes and kills Kendra. Giles is taken while Xander is injured and Willow is left in a coma. Buffy arrives too late, and a policeman finds her hovering over Kendra's body.