"I think we should lock up the rest of the swim team before they get in touch with their inner halibut."
—Buffy Summers 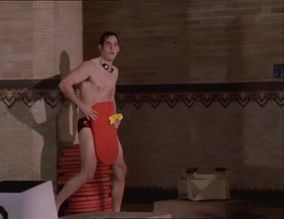 At the beach, the Sunnydale High swim team is celebrating their latest victory, while Xander complains about having such a celebration just for the swim team. Buffy sulks on a rock, watching the ocean. A guy named Cameron Walker approaches Buffy and starts sputtering out poetic words. Buffy tries to scare him off, but he says he's looking to talk. Meanwhile, Jonathan Levinson is being dunked in a bucket of ice water by members of the team. Buffy rescues him and scares off the two bullying swimmers. The bullies, Dodd McAlvy and Gage Petronzi, walk off and talk about how weird Buffy seems to them (not knowing about her being the Slayer). Then Dodd stops, while Gage Petronzi keeps walking. Gage then smells something bad but keeps going. He walks by without seeing Dodd's skin, which is lying on the ground but with nothing left inside. We see a creature walk through the sewer.

The next day, Willow Rosenberg is teaching a class, and as she is walking around checking people's work on their computers, she sees Gage playing solitaire on his computer with naked women on the cards. She tells him off, but he doesn't seem to care. After class, Principal Snyder tells Willow that they can't get a new teacher for a while and that she will have to continue covering (which pleases her). Willow then informs Snyder that Gage is failing because he doesn't show up for tests or do homework. Snyder is not interested; he tells her that, as Gage is on the swim team, he shouldn't be expected to do homework or take tests. Snyder demands that Willow change Gage's grade from an F to a D. Buffy comes to school with Cameron, and he tries to grope her. She hits his head against the steering wheel and breaks his nose. Snyder happens to see this; he and Cameron blame Buffy for the altercation. Cameron tells the Swim Team Coach and Snyder that Buffy was leading him on; the Coach, after telling Nurse Greenleigh to "take care of my boy", turns to Buffy and tells her she shouldn't dress so provocatively.

Later, Buffy rants to Rupert Giles and her friends about the incident with Cameron. Giles informs her that they found Dodd's remains on the beach. Cameron hits the sauna and hears some weird noises. The Coach bursts in and announces that Cameron has had enough. While everyone studies in the library, Xander goes out for a drink. Heading for the vending machine, he bumps into Cameron. Xander teases him for getting beaten by Buffy after he tried to paw her. Cameron heads off to the cafeteria for a snack, while Xander tries to decide between grape and orange soda. Cameron screams, and Xander rushes into the cafeteria. He finds the place in shambles, with Cameron's skin on the ground. Xander turns around and finds himself face-to-face with the creature responsible: a Gill Monster.

In the library, Cordelia Chase sketches the creature that Xander saw before running off "like a woman". Buffy and Willow return, having been informed that Cameron and Dodd were the two best swimmers on the Boys' Team; after them was Gage. Buffy is assigned to shadowing Gage - suspecting that he will be attacked next - while Willow interrogates Jonathan under a lamp. According to Jonathan, he indeed wanted revenge, but achieved it in a very different way: by relieving himself in the pool, oddly enough. Xander, who has been teased for his cowardice by Cordelia, overhears Marin and Snyder chatting. They need another swimmer, or they won't be eligible for competition; they don't even care if the guy can swim a stroke, so long as he shows up for practice. The next day, Gage grows suspicious of Buffy when she follows him around. At the Bronze that night, Buffy is confronted by Gage; she attempts to cover it up but fails. She tells him that his life is in danger, but he ridicules her by calling her a "psycho bitch" and a "head tripper", unknowing of what Buffy really is. He leaves, only to encounter Angelus in the parking lot. They complain briefly about Buffy, then Angelus vamps out and tries to vamp him. However, seconds later, Angelus stops and spits the blood out. Buffy comes to Gage's rescue. A now-fearful Gage lets Buffy walk him home, while Buffy wonders why Angelus spit the blood out.

The following day, Buffy sits in on swim practice along with Cordy and Willow. The three girls wonder what could be killing off the swimmers. Buffy suspects Gage had steroids in his blood or something else that might have attracted the monsters. Cordelia comments on a cute new addition to the team and then realizes that it's Xander. He walks over and informs them that he just made the team. Willow tells Buffy that Jonathan wasn't responsible for the swimmers' deaths, but instead got his revenge by relieving himself in the pool. At the beginning of swim practice, Gage stops in mid-lap to wave and smile at Buffy. Cordelia is delighted that she's dating a member of the Sunnydale swim team, while Buffy and Willow tease him for being almost naked. Later, the team soaks in the sauna. Xander continues to babble, but no one pays attention. Claws come up through a grate, but still, no one pays attention.

While Buffy waits for Gage to exit the boys' locker room, she hears him yell. She charges in and finds him with a Gill Monster! Gage suddenly cries out in pain and falls to the ground; he rips open his shirt, followed by his skin, and becomes a Gill Monster himself. As Buffy fights the two monsters off, one grabs her from behind and bites her in the arm. Suddenly, Coach Marin saves Buffy just by bursting into the room; although Marin is alone and unarmed, the Gill Monsters flee. Buffy is sent to Nurse Greenleigh's office. Marin is told that members of his team are becoming Gill Monsters. Buffy and Giles go hunting for Gill Monsters in the sewers but fail to find any. Meanwhile, Xander again hits the sauna; there he asks where and how he can get some steroids. His fellow swimmers tell him that he's already getting some, right here and now; it turns out the steroids are in the steam from the sauna.

Nurse Greenleigh tries to end Marin's experiments; the Coach has been attempting to improve his swim team's performance, by supplying them with steroids via the sauna-steam. To keep her from exposing him, he drops her through a grate into the sewers; there the Gill Monsters devour her. Xander warns everyone that he's had three exposures to the steam, and is in danger of becoming a Gill Monster himself. Buffy has Giles lock up the rest of the swim team, while she goes to talk with Coach Marin. She confronts him and demands information about the steroids he's been giving them, telling him he'll go to jail. Instead, the coach pulls a gun on Buffy and forces her into the same hole where Nurse Greenleigh was killed. The coach explains to Buffy that, while his monsters have already had their dinner, she's there because "boys have other needs."

Xander and Cordelia help round up the Boys' Swim Team members. Xander enters the locker room to check and see if he's becoming "scaly." A Gill Monster who used to be Shawn emerges from the locker room and jumps in the pool. Cordy, thinking it's Xander, laments about his fate. Xander suddenly reappears beside her, right before "Shawn" attacks Cordy - just missing her. They flee back to the library. Xander decides that, since Buffy hasn't returned, he should go after her. He meets up with Coach Marin and fights him for the gun (which Marin has, for some reason, left on the other side of the room beyond his reach). Xander disarms Marin, who is twice his size, and knocks the coach out. Xander looks down into the hole and sees Buffy, up to her waist in fetid water, surrounded by Gill Monsters who are about to attack and slaughter her. He pulls her out before they can do so. (Note this is the second time - in one and the same episode - that someone has conveniently shown up at the last possible moment to save Buffy, of all people, from certain doom.) Then Coach Marin bashes Xander's head with a pipe wrench from behind, incapacitating but not killing him. Marin then tries to do the same with Buffy, but Buffy ducks and trips him, accidentally causing him to fall into the hole. She tries to catch him, but fails. Being no match for the Gill Monsters in their element, Buffy can only observe as they close in and rip the Coach to pieces...literally biting the hand that feeds them. Xander recovers just in time to join her in witnessing Marin's demise.

The next day, everyone recaps; Xander and the surviving swim team members are given prescribed treatment Giles had the hospital toxicology lab come up with to ensure that the steroids don't take effect. Meanwhile, the Gill Monsters swim out into the ocean.