Save the Day, Turn Away 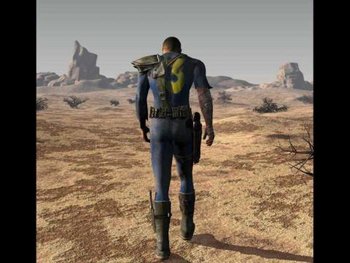 The Hero has defeated the villains who Cursed Him With Awesome — saved his loved ones in the process, turned some cynics into optimists, and used the only antidote for his mutation to selflessly cure the Littlest Cancer Patient. His love interest still wants to be with him, even with his transformation and new powers... but he doesn't exist any more. He's a freak. He tells her the man she loved is gone, he's something else now, and he leaves. She cries his name as he walks away into the night - to save the innocent and help the helpless.

Type 1: The protagonist either is a newly-minted superhero or has transformed into a hideous yet benevolent creature. He must abandon his initial goals and romance to either walk the hero's path alone or find a means to counteract his current transformation (good luck with that). The hero must tell his love interest that the man she loved is gone; only the heroic persona or hideous yet benevolent creature remains.

The hero must abandon his love interest because his very presence will deprive her of the normal life the love interest deserves. In the more optimistic and less creature-related examples, he must also leave because their love interest will never be safe from villains if he stays.

Type 2: The hero purposefully denies or is denied acknowledgment of his actions for the greater good of society.

Whatever type is invoked, it's helpful if it is followed by an emotionally resonant and important monologue.

Compare But Now I Must Go (the hero is incapable of settling down and must move on to the next place he's needed) and No Place for Me There (the hero feels that his continued presence is undesirable or undeserved). It's sometimes coupled with That Man Is Dead.

Alternative Title(s): Save The Day Walk Away