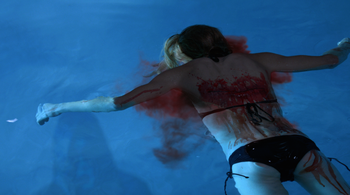 "'Tis a naughty night to swim in."
— The Fool, King Lear
Advertisement:

Many people enjoy swimming from time to time, it's fun and a complete sport. Maybe you even like taking the waves. Or maybe you just like the relaxing feeling of the sea. Or maybe you enjoy the water in company. But if you are in a fiction work you should only go for a swim in broad daylight, otherwise things tend to get a little messy...

No matter the place: the beach, a lake, a river, open sea or a swimming pool, if you go for a swim after dark you will die in the water or shortly after. It may be a Sea Monster out for dinner, it may be a Serial Killer stalking you, it may be an Eldritch Abomination coming out of the sewers or maybe you manage to drown by yourself but no matter what, you are in for a gruesome death.

This can be Truth in Television to some degree, as swimmers are less likely to see aquatic predators such as sharks and crocodiles at night, and such predators are often more active at night too. This is why many beaches close at night or at least warn people that night swimming is dangerous. In a similar vein, a human killer can take advantage of the water, darkness and often solitude of a night swimmer. Drownings also tend to take place at night, though this may be generally because it gives people plenty of time to have got drunk first.

As a Death Trope, spoilers ahoy.