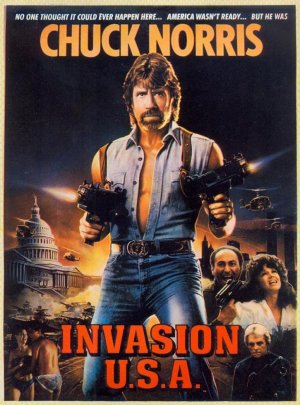 As if the U.S.A. wasn't enough, Norris saves Christmas too.
"The movie 'Invasion U.S.A.' is, in fact, a documentary."
— Chuck Norris Facts
Advertisement:

Invasion U.S.A. is an action film directed by Joseph Zito, starring Chuck Norris, and released by The Cannon Group in 1985.

The film was followed by Avenging Force in 1986, with Norris replaced by Michael Dudikoff as Hunter.

No relation to the 1952 film of the same title.