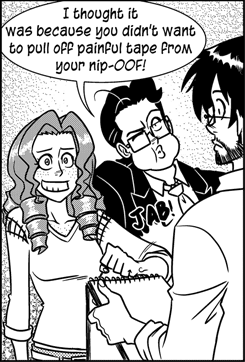 Helen: Thank you for knowing when not to speak.
Jake: I think you broke my toe.
— Daria, "Boxing Daria"
Advertisement:

You and your buddies are planning a prank, share a secret that the new guy doesn't know, or just plain have something to hide. Except one of them, usually The Ditz or a Cloudcuckoolander, can't help giggling. Or indulging in snarky remarks about the situation at hand. Or is about to tell too much, to reveal a secret or to let slip some important tidbit that better should stay unsaid. Or to express surprise at some statement, thus potentially ruining any chance of making a lie believable. Or just to comment about something at the inappropriate time and place, typically making a social situation awkward.

Cue the "Be Quiet!" Nudge in some form of slapstick violence upon the offender: an elbow/punch to the gut, a kick under the table, a stomp to the foot, a Dope Slap, etc.

If the offender is exceptionally clueless, expect them to complain: "Ow! What was that for, and what does 'ixnay' mean?" Thus eliciting another, harder, punch, stomp or kick. May induce Hurt Foot Hop.

Contrast with Footsie Under the Table. Related to Prompting Nudge.