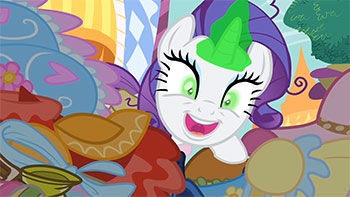 The Ponyville Foal and Filly Fair is almost underway, and Rarity is making a puppet stand with Spike's help. However, her elaborate booth is unappreciated by Claude the puppeteer, who needs a much more practical setup. Distraught, Rarity drowns her sorrows in ice cream. Seeking to help, Spike and Owlowiscious search the Castle of the Two Sisters for a spellbook that might be of use, eventually stumbling upon a hidden tome that claims to give an inspiration manifestation. Rarity recites the spell, and is granted the power to manifest her ideas, but with the warning that only true words can free her from its power. Rarity and Spike track down Claude, showing him a much better version of a puppet theater, which he accepts. Spike attempts to return the book, but Rarity decides to keep it, citing its use for her talent.

The next day, Spike goes to Carousel Boutique, which explodes outward with dresses. Rarity has been up all night under the spell's influence, creating more dresses. She intends to use the Inspiration Manifestation to beautify Ponyville, but decides not to let anyone know she's the one responsible while making Spike promise not to tell. She also refuses to ask permission to change everypony's things or to even consider that they might not like what she's done. Rarity constantly badgers Spike for compliments, and Spike constantly heaps praise on her redesigns, despite being apprehensive about their changes, with Owlowiscious watching over Spike with a stern glare. As her changes increase in scale, to the point where Twilight and all of Ponyville think there's some kind of villain on the loose, Spike realizes he needs to stop her though he fears it'll mean the end of his friendship with her.

Spike hatches a plan to steal the book from Rarity, but even when he succeeds — and eats the book — its magic continues to control her. Since Rarity intends to beautify all of Equestria, Spike finally puts his foot down and admits that her changes aren't making things better, and he should have told her sooner. This is what finally breaks the Inspiration Manifestation, and Rarity returns to normal. Spike apologizes for not telling the truth sooner, to which Rarity replies that he should never be afraid to tell her the truth, because they're friends.

Back at the library, Spike writes in the Mane Six's journal that a true friend won't be angry if you tell them the truth, because they know you care about them. Twilight enters, visibly frazzled, having had to clean up all of the dark magic Rarity was using. She scolds Spike for taking a book from the old castle's library...to which Spike replies that Twilight looks awful. He's just being a good friend by telling her the truth, right?