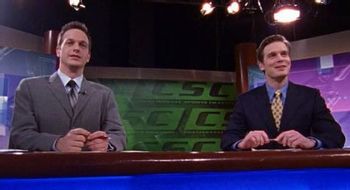 "Good evening everybody, from New York City, I'm Dan Rydell alongside Casey McCall. You're watching Sports Night on CSC, so stick around."
Advertisement:

The single camera dramedy about an ESPN-style sportscast (see SportsCenter) created and (mostly) written by Aaron Sorkin went off the air after just two seasons on ABC from 1998 to 2000, but it remains a cult favorite and an influential example of the form.

Most of the 22-minute episodes featured a similar pattern:

During the first season, Sports Night employed a Laugh Track, with mixed results. Because Sorkin disliked the Laugh Track, it was gradually dialed down during the season, and disappears entirely for the second. At the beginning of season one, the Laugh Track points up the structure by cackling riotously for the first 12 minutes and then staying oddly silent throughout the latter acts.