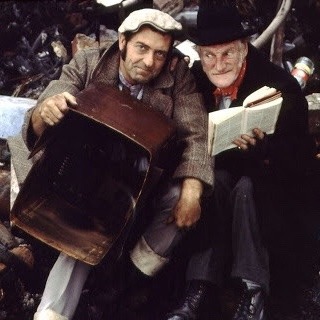 "Well, that's that, then."
"Bognor, here we come!"
—The first and last lines from the series
Advertisement:

A classic Brit Com of the 1960s and '70s, written by famed British comedy writers Ray Galton and Alan Simpson, focusing on the perennial conflicts between a pair of rag-and-bone men, Harold Steptoe (Harry H. Corbett) and his elderly father Albert (Wilfrid Brambell). Airy, pretentious snob Harold has finer aspirations than riding the horse-and-cart for the rest of his life and is determined to improve himself, whilst wily, sneaky Albert is equally determined to sabotage his every effort and keep him in the family home for a good while yet.

The show was noted for being a lot more gritty and down-to-earth than most other sitcoms of the age, focusing on two obviously poor, working class and downtrodden men, with most of the humour coming from the interactions between the characters rather than farce and slapstick, and their situation providing a great deal of pathos for the two characters. Picked up from a pilot episode in the Anthology Series Comedy Playhouse, it had two runs on The BBC (1962–65 and 1970–74note  The later run was made in colour, but many episodes from 1970–72 only survive in black and white copies), and was adapted to radio as well as two feature films. More recently, there was a stage play called Steptoe and Son in Murder at Oil Drum Lane, in which Harold returns to the junkyard in 2005, and is confronted by the ghost of Albert.

Right after it ended, the show received an equally-beloved Foreign Remake by Norman Lear as Sanford and Son, riding off of the success of Lear's previous remake of 'Til Death Do Us Part, All in the Family.