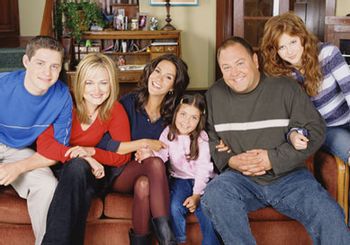 The cast. From left to right: Brian, Linda, Judy, Tina, Bill, and Lauren.

"I wouldn't have it any other way,
Cause you make me happy..."

Set in Chicago, Bill and Judy Miller have never really given up their high-school antics, despite having three children to raise: brainy Brian, spoiled Lauren, and strange little Tina. Judy's unlucky-in-love sister Linda often pops in to trade barbs with Bill. The end of episodes usually deal with a role reversal by having the kids teach a lesson to the adults.

Has nothing to do with the Glurge-filled Strawman Political autobiography penned by a Miss USA contestant, the documentary/stand-up series