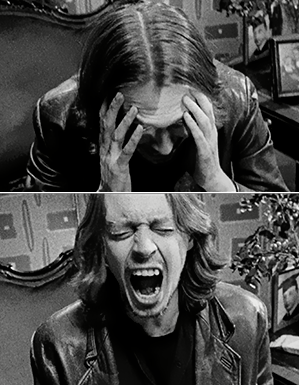 "I'm so frustrated I could just scream!"
— Fluttershy, My Little Pony: Friendship Is Magic, "Green Isn't Your Color"
Advertisement:

Things have been getting crazy, the plot has been thickening, and The Hero has been keeping calm the whole time, despite the fact that the one thing The Hero wants to do is to go off and scream for a little while.

Despite the similarity in name, has nothing to do whatsoever with And I Must Scream, or The Scream (which is a Fate Worse than Death and a horrific reaction, respectively. This is a frustration trope). May overlap with Skyward Scream and Angrish. Sister trope of Cathartic Crying. Has nothing to do with a Jerkass having a screaming breakdown to the satisfaction of the audience. That's Catharsis Factor.

Taskmaster - I LOVE THIS

Having to start over her silent cocktail one too many times, Daisy May Cooper lets off some steam.

Taskmaster - I LOVE THIS

Having to start over her silent cocktail one too many times, Daisy May Cooper lets off some steam.