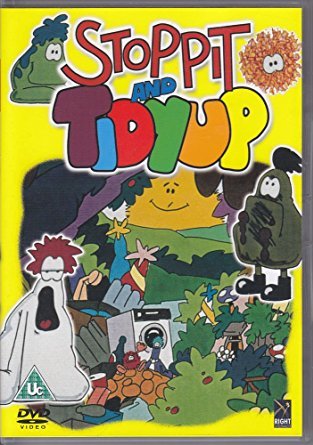 In the tiny, tiny land of Do As You're Told, there live two creatures: Stoppit, a red, hyperactive furball who lives in a human-sized dump yard, and his friend Tidyup, a more mature blue creature that wears a tie and is a neat-freak and passionate gardener, growing giant multi-coloured gherkins to eat. Other inhabitants of Do As You're Told serve as Stoppit and Tidyup's friends; each episode revolved around one of these friends of theirs and was named after whichever friend it focused on. Other characters include the Naughties, which are dark blue and yellow spherical creatures, and the Sit Downs, which are white creatures that do nothing but sit down.

Stoppit and Tidyup was created by CMTB Animation and Queensgate Productions, the same companies that made The Trap Door and Bump, and aired in 1988. The show was also worked on by Keep Britain Tidy

, which was known as the Tidy Britain Group back then. The show was narrated by Terry Wogan.

Stoppit and Tidyup provides examples of: